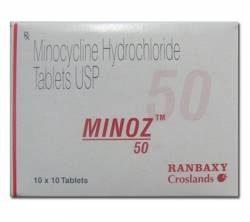 Minoz contains Minocycline HCL as an active ingredient. Minoz works by fighting against bacteria in the body. Minoz (Minocycline HCL) is a synthetic and sterile antimicrobial agent used against a wide range of gram positive and gram negative bacteria. Minoze, like other antibiotics stops the bacterial protein synthesis and ultimately causes the death of a bacteria.

Minoz belongs to a group of drugs known as tetracycline antibiotics, which works by preventing bacteria from making protein they need to function and survive. Minoz is used to treat many different bacterial infections, such as urinary tract infections, respiratory infections, skin infections, severe acne, gonorrhea, tick fever, chlamydia, and others.

Minoz may cause unwanted side effects such as: dizziness, breathlessness, loss of appetite, discoloration of teeth, increased liver enzymes, diminished capacity for physical sensation.