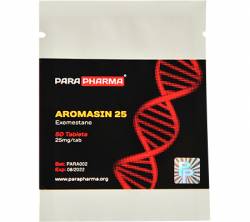 AROMASIN a new generation of drug that blocks enzymes responsible for aromatisation. Exemestane is significantly different from drugs belonging to the class of aromatase inhibitors. AROMASIN is a better drug. Familiar aromatase inhibitors have only a temporary efficiency, but AROMASIN has an irreversible and permanent effect. As a result of the drug are suppressed 85% or more estrogens in the body of the athlete.

AROMASIN during steroid cycle prevents the side effects that steroids can cause - flavoring. It should be noted that the effect of AROMASIN is fundamentally different from the usual action of Nolvadex for many athletes. It is known that Tamoxifen has no effect on the aromatization process. It just begins to interact with the cellular estrogen receptors, preventing estrogen to join them and form a bond. Exemestane also acts on the process of flavoring and suppresses it. AROMASIN structure is very similar to a naturally occurring steroid - androstenedione. Exemestane principle of operation is that it irreversibly binds to active enzymes hormones. As a result, hormones lose their activity. AROMASIN has no estrogenic or progestogenic activity. But it is characterized by mild androgenic activity.

AROMASIN is used in medicine for treatment breast cancer in postmenopausal women (natural or induced), progressing against the background of antiestrogen therapy, non-steroidal aromatase inhibitors or progestins.

AROMASIN side effects may occur frequently and in varying degrees. For example, an athlete may face unpleasant consequences such as: nausea, fatigue, sweating, dizziness, headache, skin rash, insomnia, etc.